from 40 Questions About the Historical Jesus
by C. Marvin Pate.

The question, “did Jesus remain in the tomb three days and three nights,” has kindled heated discussion, the interpretation of which has fallen generally into two camps. There are those who vociferously argue that Jesus must have been in the grave for seventy-two hours and that those who disagree are denying Jesus’ prediction in Matthew 12:40 (“For just as Jonah was three days and three nights in the belly of the sea monster, so will the Son of Man be three days and three nights in the heart of the earth”). But the other view, rightly we believe, argues that Jesus’ stay in the grave Friday night, Saturday, and early Sunday morning meets the specifications of Matthew 12:40. Perhaps the best way to proceed through this debate would be to examine the key descriptions in the matter: “on the third day,” “after three days,” “three days and three nights,” and Jesus’ word to the thief on the cross with him, “Today you will be with me in Paradise” (Luke 23:43). Finally, we will touch upon Hosea 6:2.

As we mentioned above, Matthew 12:40 creates a parallel between Jonah’s time in the belly of the fish and Jesus’ time in the grave—“three days and three nights.” It is interesting that Esther 4:16 equates “three days and nights” with “the third day” in Esther 5:1. Thus, these two phrases are also synonymous. Pulling our findings so far together, we may say that all three phrases—“the third day,” “after three days,” and “three days and nights”—are synonymous. It is clear that these three phrases as applied to Jesus’ death and resurrection fit the ancient Jewish interpretations well in that God raised Jesus, the true Israel/the righteous Suffering Servant, from the dead. But more specifically we may say, based on the Old Testament, that the language of “three days and nights,” “third day,” ”after three days” does not require that Jesus was in the grave for seventy-two hours, since in Jewish reckoning any part of a day could count as a day (cf. Gen. 42:17–18; 1 Sam. 30:1, 12–13; 1 Kings 20:29; 2 Chron. 10:5, 12; Esther 4:16–5:1).[2] Herein lies the answer to the question, “how long was Jesus in the grave”—for three days, namely, a part of Friday (day one), Saturday (day two), and a part of Sunday (day three).[3]

“Today You Will Be with Me in Paradise”

But does Luke 23:43 contradict Jesus’ promise that he would be in the grave three (parts of) days? I write of this elsewhere:

Traditionally, the word “today” (sēmeron) has been under- stood to be a chronological reference to a twenty-four-hour period. The difficulty with this view is its apparent conflict with biblical teaching elsewhere which suggests that Jesus first “descended” to Hades after his death (Matt. 12:40; Acts 2:31; Rom. 10:7) and then afterward ascended to heaven (Luke 24; Acts 1:9–11), a time span covering three days. Therefore, more contemporary scholars tend to take the time frame eschatologically, with reference to the spiritual kingdom that was present in the first coming of Christ (see Luke’s use of sēmeron in this manner in 2:11; 4:21; 5:26). E. Earle Ellis expresses this view relative to v. 43 succinctly: “Today is sometimes a technical expression for the time of messianic salvation. Here that time is Jesus’ exaltation at the resurrection. The latter view seems to be what Luke intended.”[4]

Consequently, Luke 23:43 does not contradict the other Synoptics statements that Jesus predicted that he would be in the grave for three (parts of) days.

We referred earlier to Hosea 6:2 which in the Hebrew text reads, “He will revive us after two days, on the third day he will raise us up that we may live before him.” Most likely, Jesus’ passion predictions regarding his resurrection on the “the third day” owe their inspiration to this text (see also 1 Cor. 15:4).[5] Indeed, already by the second century AD, the Aramaic translation of Hosea 6:2 takes this verse as predicting Israel’s future resurrection:

They will say: Come, and let us return to the service of the Lord; for he who has smitten us will heal us; and he who has brought ruin upon us will give us rest. He will revive us on the days of consolation which are about to come; on the day of the resurrection of the dead he will raise us up and we shall be revived before him.[6]

Craig Evans writes of this, “The allusion to this passage [Hos. 6:2] in all probability derives from Jesus himself and not from the evangelist or early tradents searching for a scriptural warrant [for Jesus’ resurrection].”[7] With this conclusion we concur.

This chapter has provided an answer to the question, “did Jesus remain in the tomb three days and three nights? In light of the fact that the three phrases— “the third day,” “after three days,” and ”three days and three nights”—are synonymous, we may say that Jesus was in the grave three (parts of) days. Luke 23:43 does not contradict this fact. And, in all likelihood, Jesus applied Hosea’s prediction (Hos. 6:2) of the resurrection of true Israel/the righteous Suffering Servant to himself.

[3] See R. T. France’s discussion of the relationship of the “heart of the earth” to “Hades,” discounting any hint that Jesus descended to the abode of the dead between his death and resurrection (The Gospel of Matthew [Grand Rapids: Eerdmans, 2007], 491n. 14). We disagree with France here and will in the next chapter argue instead that Jesus did indeed descend to Hades between his death and resurrection.

This post is adapted from 40 Questions About the Historical Jesus written by C. Marvin Pate. If you are interested in adopting this book for a college or seminary course, please request a faculty examination copy. We will also consider requests for your blog or media outlets. 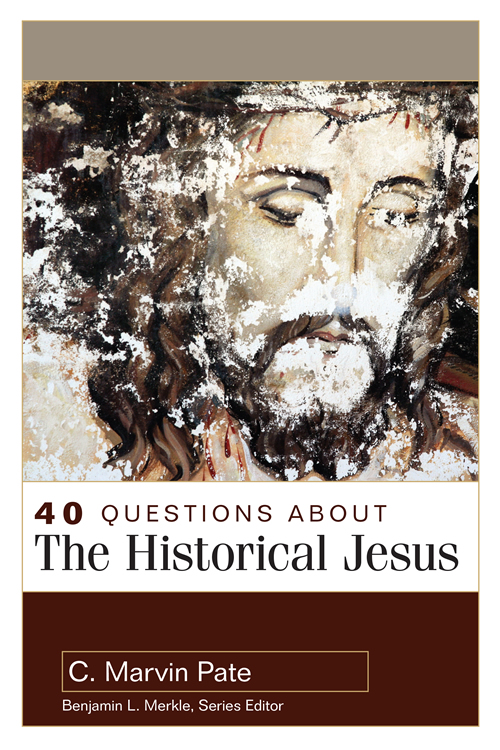 This work argues that the canonical Gospels are the most trustworthy information we have about the gospel writers as well as the life and ministry of Jesus, including his death, visit to hades, resurrection, and ascension. Readers will be encouraged by the reliability of the Gospel writers, the reality of Jesus’ humanity and deity, and the inferiority of the apocryphal gospels.

Want to learn more about the 40 Questions Series? Visit the new website 40Questions.net!

C. Marvin Pate (PhD, Marquette University) is professor of biblical studies at Ouachita Baptist University. He is the author and editor of numerous works, including Four Views on the Book of Revelation; The Writings of John: A Survey of the Gospel, Epistles, and Apocalypse; Romans (Teach the Text Commentary Series); and From Plato to Jesus.