Conflict in Faith and Science—Part II: Cain and the Nephilim
from Friend of Science, Friend of Faith: Listening to God in his Works and Word
by Gregg Davidson

Cain’s fear of others he would encounter has long been a puzzle. At the time of Cain’s banishment, he was the second child of the first humans in existence. Who else was there to fear? The most common explanation is that Adam and Eve had other children that populated the area into which Cain was exiled. Genesis 5:4 does say Adam and Eve had other sons and daughters, and a population can rise rather quickly from a single fertile pair, but it turns out to be an inadequate explanation. There are problematic timing and location issues.

A timing problem: The first three sons of Adam and Eve are explicitly named. Abel, the firstborn, died childless (no genealogy). Cain, the second born, did not have his first son, Enoch, until after Cain was already exiled (Gen. 4:16–17). Seth, the third son, was not born yet when Cain killed Abel. In Genesis 4:25, Eve states that God gave her a son, Seth, to replace Abel. There is no indication of a delay between Cain’s crime and his punishment, so Cain’s banishment most likely occurred before Seth was even born. If Cain’s fear was of his relatives, it would have to be an unlikely fear of their future birth and settlement in the land of his wanderings.

Consider, however, the possibility that Adam and Eve had been taken from a population of hominids and set apart, endowed by God with an eternal spirit. The population from which they were drawn would have been biologically equivalent, though lacking the divine spark that made Adam and Eve what we think of as truly or fully human.[1] It would make perfect sense for Cain to personify those he encountered and to fear their hostility.

If we fast-forward several generations in Genesis, we find by Chapter 6 that humankind, with only one exception, had universally degenerated into wickedness. At the top of the list of infractions was sexual unions between the “sons of God” and the “daughters of men,” which gave rise to the Nephilim. The Nephilim were exceptional in their physical prowess, referred to as “mighty men of old, men of renown.” Men of great physical stature encountered later in the land of Canaan were described as descendants of the Nephilim (Num. 13:33).

Traditional interpretations of these verses vary widely.[2] One interpretation is that the sons of God were noblemen who took wives from among the common people. Another is that the sons of God refer to the righteous line of Seth who intermarried with the unrighteous line of Cain. Still another is that they are fallen angelic beings that took human wives who gave birth to children of great physical size and prowess. Each of these interpretations represents a reasonable attempt to understand the passage, but none are free of logical difficulties.

The idea that the sons of God were nobles is not likely, given the use of the Hebrew word ‘elohim, translated in this instance as “God.”[3] Though ‘elohim can be used as an honorary title, similar to addressing a magistrate as “lord,” the word is never used elsewhere in Scripture to distinguish between people of different classes. Unions between noblemen and commoners also fail to account for offspring of unique stature.

The interpretation that the sons of God are the righteous line of Seth is often accepted not on its own merit, but because the other options are deemed worse. This interpretation is also weak, for there is no indication that God forbade marriage between the offspring of Seth and Cain, nor is there reason to believe that unions between them would give rise to anything other than normal human beings. Further, the idea of a “righteous line of Seth” is a misnomer. If the line of Seth were truly righteous, they would not have so readily taken wives from among the unrighteous, nor would there have been need for the flood. The wickedness of mankind fully encompassed both lineages, with the sole exception of Noah.

Identification of the sons of God as fallen angels comes from passages such as Job 1:6, where Satan is identified as among “the sons of God” presenting themselves before Yahweh.[4] Jude 6 makes a reference to angels who “abandoned their proper domain,” and 2 Peter 2 speaks of the sin of angels followed by mention of human sins in the days of Noah, possibly linking the events in time. I find several problems with this understanding.

In this context, we will consider again the possibility that the descendants of Adam and Eve lived near their ancestral hominid population, and, depending on the timing, perhaps even crossed paths with Neanderthals. Though of human likeness, these creatures would have been considered “strange flesh.” As biological equivalents, sexual attraction and unions could have been physically possible, but intolerable in God’s sight in much the same way as the acts of Sodom and Gomorrah:

Sodom and Gomorrah and the cities around them, since they in the same way as these indulged in gross immorality and went after strange flesh, are exhibited as an example in undergoing the punishment of eternal fire. (Jude 7)

It is possible that “daughters of men” and “sons of God” refer to humans and their neighboring hominids, where “sons of” can mean the offspring or creation of God. If intermixing was widespread, as Genesis 6 implies, this could readily account for the genetic diversity that leads geneticists to claim a minimum population size of 10,000, while also tracing our ancestry back to a common mother.[5] It could also account for why such unions are described as occurring in the early days of human existence, and then never again. The only thing missing is why these unions might have produced unusual offspring. As biological equivalents, there is no obvious reason why children of a human and neighboring hominid would have been unique. This could be as simple as the presence of a subgroup of contemporary hominids with a more robust body plan. Given the ubiquitous human tendency of assigning names to things we think are odd or different, it would have made perfect sense to apply a unique term to the offspring of such unions.[6]

One might speculate further, given the genetic evidence we have today, if the Genesis story dates back to a period of overlap between humans and Neanderthals. This could have occurred if the date was several tens of thou- sands of years ago, or if a population of Neanderthals persisted beyond what we find in the fossil record, or even if a highly hybridized subpopulation existed at the same time as the first true humans. Neanderthals were not the brutish ape-men depicted in cartoons. Though of diminished cognitive potential relative to humans, Neanderthals were nonetheless similar to humans in appearance and many behaviors. They lived in groups, fabricated tools, placed items related to daily life in the graves of their dead, and may have engaged in rudimentary art.

Neanderthals were not taller than humans, but their bone structure was designed for a greater musculature and greater strength. Reproduction between humans and Neanderthals, now documented within the human genome, could have plausibly produced individuals of admirable strength and prowess in hunting or battle. It is also possible for hybrids to combine genes in a way that produces traits not found in either parent, a phenomenon known as heterosis. It is thus possible that some of these offspring could have had unusual stature as well as strength, giving people another reason to identify them by a special name.

[1] Analogous models have been proposed by Kemp, “Science, theology, and monogenesis”; Wilcox, “A proposed model for the evolutionary creation of human beings: from the image of God to the origin of sin”; Alexander, “Human origins and genetics.”

[5] It would be natural here to question whether the union of a human with a soul to a hominid without a soul would produce a child with a soul. There is no way of answering this question, other than to speculate that perhaps the child possessed a soul by analogous reference to Paul’s claim that the child of a believing and unbelieving parent is sanctified, or considered clean, through the believing parent (1 Cor. 7:14).

[6] Davidson, “Genetics, the Nephilim, and the historicity of Adam.”

This post is an excerpt from Friend of Science, Friend of Faith: Listening to God in His Works and Word by Gregg Davidson. If you are interested in adopting this book for a college or seminary course, please request a faculty examination copy. We will also consider requests for your blog or media outlets.

A scientist explores the harmony between Christian faith and science 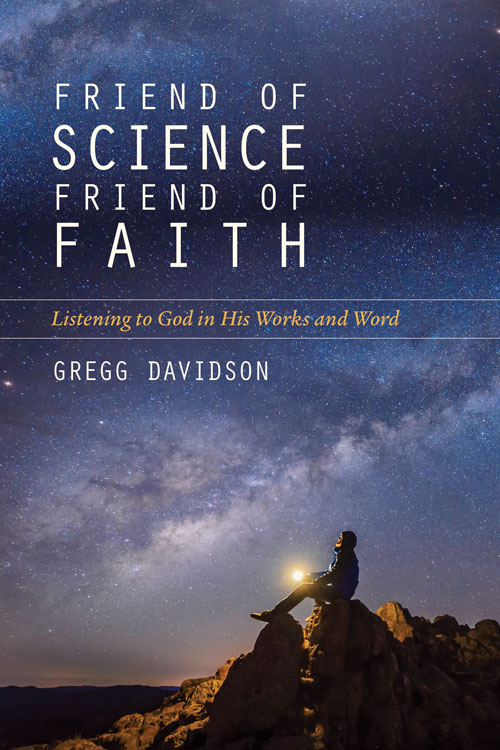 Though some Christians and many skeptics see science and Christianity as lock in a never-ending battle, geologist Gregg Davidson contends that there is tremendous harmony between Scripture and modern science. Many apparent conflicts arise when the Bible is interpreted apart from its literary and historical contexts, but when these are taken into account, most alleged clashes dissolve.

Proceeding from a belief that Scripture is inspired and without error and that God’s creation should inform how we interpret the Bible, Davidson shows that Scripture and science need not disagree on issues like the age of the earth, Adam and Eve, Noah’s flood, the origin and development of life, and numerous related topics. Rather, Christians can rejoice at how God’s glory is revealed in both the Bible and the natural world.

Share. Twitter Facebook LinkedIn Email
Previous ArticleConflict in Faith and Science—Part I: The Ultimate Artist
Next Article How Do Catholics Understand the Interdependence between Nature and Grace?

Gregg Davidson (PhD, University of Arizona) is a professor and chair of the School of Geology and Geological Engineering at the University of Mississippi. His other works include Friend of Science, Friend of Faith.